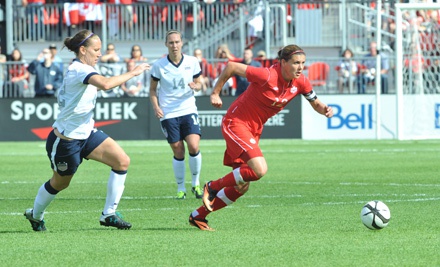 This is a limited 1-week only sale that will expire at midnight on Saturday, October 12, 2013. Click here to buy now or for more information about the deal. Quantities are limited so don’t miss out!

The Fine Print
Expires Oct 30th, 2013. Limit 4 per person. Valid only for option purchased. Redeem starting 10/30 for a ticket at venue will call. Must show valid ID matching name on Groupon at Commonwealth Stadium. Refundable only on day of purchase. Must purchase together to sit together. Discount reflects Ticketmaster’s current ticket prices-price may differ on day of the event. Gates open 1 hour before game time. For ADA accommodations, call box office promptly upon receipt of voucher – availability is limited.

On October 30, the women’s national soccer team storms into Edmonton’s Commonwealth Stadium for the first time since 2005 to face off against Korea Republic. Though the tilt is a friendly, Korea Republic enters the matchup with revenge on their minds: since 2000, these two teams have met a total of four times, with Canada emerging victorious from three of those match-ups. Team Canada is also slated to play their opening match of the 2015 FIFA Women’s World Cup on Edmonton soil, giving fans a chance to find which cheers are most effective at using the stadium’s acoustics to rattle opposing sides.