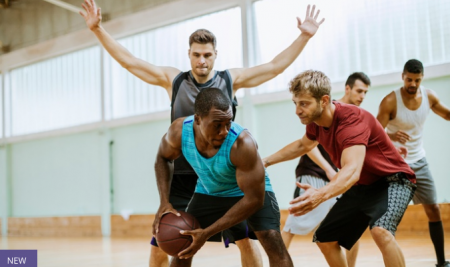 Today’s Groupon Edmonton Daily Deal of the Day: The Basketball Academy: $49 for One Intro Day, $125 for Half Day Week Long or $250 for Full Week Basketball Camp (Up to 51% Off)

Sure, skill and teamwork make up the bulk of what helps athletes win a game—but the court itself matters, too. Read on to learn about one of its most useful markings.

In an American Basketball Association game in 1967, Indiana was down by two points against Dallas with one second left to play. With no time to do anything else, point guard Jerry Harkness caught an inbound pass and hurled the ball the length of the court, banking it off the glass and into the net. Relieved that he’d kept his team alive for overtime, Harkness started walking to the bench to prepare when officials interceded to inform him that his 92-foot desperation heave was a game-winner. He was, in fact, almost 70 feet behind the league’s newly minted line behind which all shots—whether hurled or floated—were worth three points. Today such lines, which trace an arc around the basket, are part of the game nearly everywhere organized basketball is played.

The line’s distance from the basket varies by league and level of play. In the NBA—which didn’t adopt a three-point line until 1979—the semi-circle sits 23 feet, 9 inches from the basket (from the corners, the distance is 22 feet), though sharpshooters in International Basketball Federation competition nab the extra point for any shot beyond 22 feet, 1.7 inches. Elite shooters typically net somewhere around 40% of their shots from behind the line, and their ability to pull defenders out to the perimeter and create interior space for their teammates—not to mention their potential as last-second saviors—is invaluable for virtually any successful basketball team.

This is a limited 3-day only sale that will expire at midnight on Monday, October 31, 2015.

The Fine Print
Promotional value expires 120 days after purchase. Amount paid never expires. Must sign waiver. Not valid on Federal Holidays. Reservation required. Limit 5 per person, may buy 1 additional as gift. Valid only for option purchased. Camps and training are available from ages 5 to 18. Merchant is solely responsible to purchasers for the care and quality of the advertised goods and services.

The Basketball Academy molds tomorrow’s hoops stars by emphasizing instruction over competition. Here, coaches encourage students of the game to measure their progress through their own accomplishments—not by constantly comparing themselves to others. What’s more, positive reinforcement and a dedication to fundamentals permeate all of the Academy’s many offerings, which include camps, leagues, travel teams, community programs, and more.