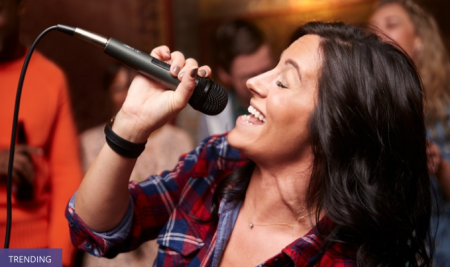 Today’s Groupon Edmonton Daily Deal of the Day: Yakitori Grill: $26 for Karaoke (Up to 62% Off)

This is a limited 1-day only sale that will expire tonight at midnight (Saturday, December 7, 2019).

Need to Know
Fine Print and Helpful Information
Promotional value expires 180 days after purchase. Amount paid never expires. Reservation required, 24 hour advance notice required. Subject to availability. Limit 1 per person, may buy 1 additional as gift(s). May be repurchased every 30 days. Limit 1 per visit. Valid only for option purchased. Must provide 18+ ID to receive alcoholic beverages. Not valid with other offers or promotions. Merchant is solely responsible to purchasers for the care and quality of the advertised goods and services.

Whether giving a wedding toast or performing karaoke, anyone can fall victim to stage fright. Read on to learn about the physiology behind this common affliction.

Sure, it’s an old joke, but according to polls, most people at a funeral really would rather be in the coffin than giving the eulogy. Indeed, stage fright is one of the most common phobias, ahead of heights, flying, and even death itself. Like most phobias, stage fright is caused by an irrational perception of impending danger that doesn’t actually exist. Charles Darwin dubbed this response “fight or flight syndrome” after conducting an experiment at the zoo: pressing his face to the protective glass between him and a snake, he would still jump back when the snake lunged toward him. “My will and reason were powerless,” he wrote, “against the imagination of a danger which had never been experienced.”

Though Darwin’s observation explains the response to a physical threat, the same mechanism kicks in when many of us face an audience. As social animals, humans care about their reputations. Public speaking can present a threat to a person’s reputation through embarrassment. The primitive parts of the brain kick into action when orating, processing the negative consequences of embarrassment the same way they might process a lion threatening to pull your hair. The hypothalamus triggers the pituitary gland to secrete the hormone ACTH. This in turn stimulates the adrenal glands in the kidneys and sends a rush of adrenaline into the bloodstream. Muscles in the neck and back may contract and blood pressure may increase. The digestive system shuts down to maximize delivery of nutrients and oxygen to vital organs, which is what can cause dry mouth and the sensation of butterflies in your stomach. Pupils may dilate, making it hard to read anything up close but improving long-range visibility to home in on blank faces staring back at you.

The intensity of stage fright can be affected by genetics, level of task mastery, and situational stakes, and not even trueborn stars are immune. Barbra Streisand has talked openly about her struggles with decades-long stage fright stemming from a concert in 1967 in which she forgot the lyrics to a song. According to an NPR profile, Ella Fitzgerald is actually famous because of her stage fright. During an amateur night at Harlem’s Apollo Theater, she had planned on dancing, but a sudden bout of stage fright inspired her to sing instead—catching the ear of bandleader Chick Webb, who invited the 16-year-old unknown to join his orchestra.