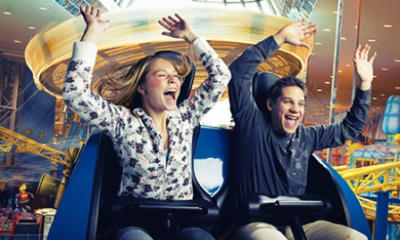 Reminder Update: I originally posted about this deal yesterday. Here’s a reminder that it’s still available to buy today. At the time of this post, they have already sold over 60+ vouchers so don’t miss out!

A trip to the mall involves shopping, dining, and throwing pennies into the fountain so the statue can buy some lunch at the food court. Cruise the mall with this Groupon.

This is a limited 4-day only sale that will expire at midnight on Friday, October 18, 2013. Click here to buy now or for more about the deal. Quantities are limited so don’t miss out!

In a Nutshell
Scream down a 14-storey indoor roller coaster, splash through a wave pool, or watch a sea lion show in a shopping mall with 800+ stores

The Fine Print
Expires 180 days after purchase. Limit 4 per person, may buy 4 additional as gifts. May redeem only at West Edmonton Mall Guest Services by Galaxyland main gate. Not valid 12/20-12/24/13. Must follow all Multi-Play Pass Terms and Conditions. See the rules that apply to all deals.

West Edmonton Mall holds multiple world records. The one people notice first is the world’s largest parking lot, but the one they tend to remember is the world’s largest indoor triple-loop roller coaster, the Mindbender. It’s one of the centrepieces of Galaxyland Amusement Park, and if the loops weren’t enough to qualify it as an “advanced ride” on the park map, its 14-storey peak certainly would be. From its track, families can see more than 23 other space-themed rides and play areas, as well as the mall beyond, bustling with a city-sized stretch of attractions.

Another world record—world’s largest indoor wave pool—can be found inside World Waterpark. Here, kids and adults alike careen down slides such as Cyclone, while smaller children play in the kiddie pool and even smaller children splash each other at Caribbean Cove. Regardless of the weather outside, the park’s temperature holds at a balmy 31 degrees Celsius. To cool off without getting wet, though, patrons can always head underground to meet a few penguins. Alongside sea turtles, sharks, and stingrays, they’re citizens of Sea Life Caverns, an aquarium that earns the mall its accreditation as a zoo.

In the face of all its theatres and thrills, it can be easy to forget that the mall began as a shopping centre modelled after an urban Persian bazaar. More than 800 stores and services serve as an easy reminder, however. They enable shoppers to browse apparel, electronics, and home accessories between refuelling stops at restaurants and pubs.