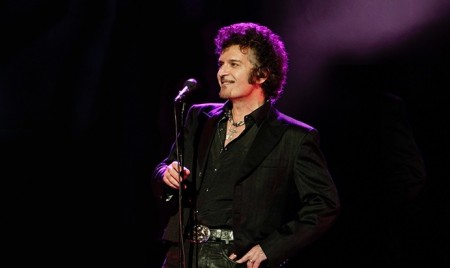 This is a limited 5-day only sale that will expire at midnight on Tuesday, February 9, 2015.

The Fine Print
Promotional value expires Feb 14, 2016. Limit 8/person. Refundable only on day of purchase. Must purchase together to sit together. Merchant reserves right to substitute closer seat. ADA seating cannot be guaranteed; contact box office prior to purchase for availability. Holder assumes all risk in connection with the event and releases Groupon, Ticketmaster, venue and their affiliates from any related claims. Not redeemable on mobile app. Ticket value includes all fees. Discount reflects Ticketmaster’s current ticket prices, which may change. Merchant is solely responsible to purchasers for the care and quality of the advertised goods and services.

Gino Vannelli is: the Montreal-born soft-rock and soul singer whose voice is even more impressive than his hair
His 1974 breakout hit: the funky dance jam “People Gotta Move”
The contradictory followup: “I Just Wanna Stop,” Vannelli’s Grammy-nominated ballad
Other hits from his 40-year career: “Wild Horses,” “Black Cars,” and “Living Inside Myself”
How many Juno Awards he’s won: enough that an octopus wearing a cast could hold one with each free tentacle
How many Juno nominations he’s earned: enough that if he’d won them all, he’d need at least two more octopuses
What AllMusic.com said about 2006’s These Are the Days, a mix of remastered classics and new compositions: “Like a fine wine, some things just age with grace and impeccable class, and such is the case with Gino Vannelli.”