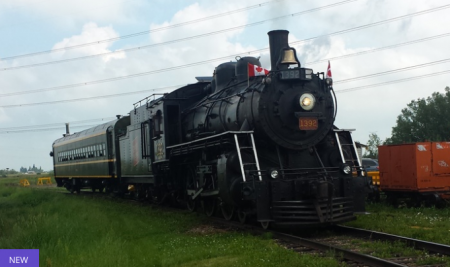 Today’s Groupon Edmonton Daily Deal of the Day: Alberta Railway Museum: $14 for Museum Admission with Train Ride for Two, $28 for Four, or $24 for a Family (Up to 42% Off)

The Fine Print
Promotional value expires Sep 5, 2017. Amount paid never expires. Limit 2 per person, may buy 2 additional as gifts. Valid only for option purchased. Kids Tickets valid for ages 3–12. Must use promotional value in one visit. Merchant is solely responsible to purchasers for the care and quality of the advertised goods and services.

Size: The outdoor museum resembles a small terminal with multiple train stations of varying sizes, a water tank used to fill steam trains, and more than 75 cars and locomotives onsite.
Eye Catcher: Built in 1909, St. Alberta Station wasn’t just a place for passengers to arrive and depart, it also housed telegraph facilities and provided living quarters and office space for station agents. Today, it’s where the museum’s tours start.
Crown Jewel: The 1392 steam locomotive, built in Montreal, Quebec in 1913, was among the first of its kind to run into Edmonton on the Canadian Northern Railway. After retiring from moving mixed freight in the late 1950s, it pursued a career in acting, appearing in the films Days of Heaven and Monte Walsh.
Don’t Miss: The museum’s Northern Alberta Railways work train is one of the only surviving complete sets. It was used for repairing trains and maintaining railroad tracks.
Hidden Gem: Although it’s not much bigger than an outhouse, Opal Station did technically function as a railway station flag stop in the hamlet of Opal, Alberta.
Pro Tip: Tours involve a lot of walking around and climbing stairs, so wear comfortable shoes—not sandals or open-toed footwear.